You guys. Look at this thing. LOOK AT IT.

Via Making Game of Thrones:

END_OF_DOCUMENT_TOKEN_TO_BE_REPLACED

Episode 8, “No One,” drew parallels between long-warring Houses Stark and Lannister.

END_OF_DOCUMENT_TOKEN_TO_BE_REPLACED 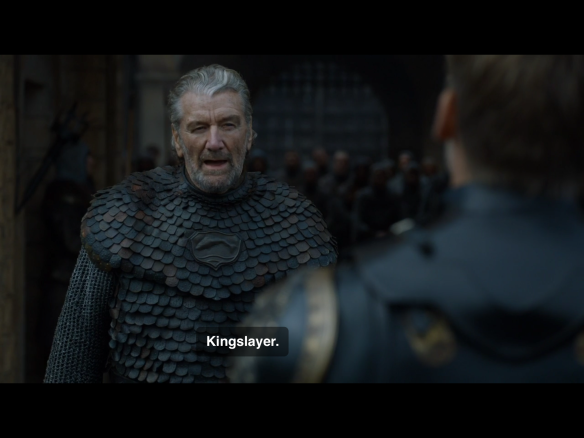 This is the part where I see if I can figure out what exactly Uncle Brynden is trying to accomplish this season.

END_OF_DOCUMENT_TOKEN_TO_BE_REPLACED

Putting this stuff under a cut for the benefit of my European peeps who have to wait until tonight to see Episode 7:

END_OF_DOCUMENT_TOKEN_TO_BE_REPLACED

Some time ago, Daniel Portman (Podrick) did an interview with IGN in which he said some things about Pod & Brienne’s biz in Season 6, and it made me a little uncomfortable:

IGN: A lot of Season 5 was Pod and Brienne waiting for Sansa, waiting for the sign, and there’s sort of the twist at the end where they go off and find Stannis. So what can you say of where they find themselves at the beginning of Season 6 and what the payoff for that waiting last season might be?

Portman: Now, I have to be diplomatic. [laughs] So, what I will say is, you’re right, Season 5 was a series of near misses. Brienne is a very strong-minded character, and she has goals and a real drive to do the right thing, and while Podrick is with Brienne, they’re going to continue down that path, trying to fulfill the oath that she made. So I would say that’s where we start in Season 6, essentially in the same place — not geographically, but in the same place as we started in Season 5, where they’re still trying to do what she said she was going to do.

IGN: I feel like this show doesn’t often repeat itself, so does that mean, even though they’re starting in the same place, the journey might be significantly different than last year?

Portman: Absolutely, absolutely. They’re both different character, different people, after everything that happened in Season 5. Their situation changed them, and their relationship has grown. So they are different people, and they are geographically in a different place, but they are sort of back to square one in terms of their quest.

Having spent much of the past year arguing in favor of Season 6 being the time when Brienne finally makes the connection with Sansa she’s been trying to achieve all this time…this interview made me nervous. Just a bit.

BUT HERE’S THE THING. Portman sort of sounds like he’s telling us our nightmares have come true and Bri has to spend yet another season not having already connected with her lady’s daughter, but if that’s really what happens, then he just gave a lot of information away. Which makes it very odd that he began his answer with: “Now, I have to be diplomatic. So, what I will say is…”

(SPOILERS below the jump)

END_OF_DOCUMENT_TOKEN_TO_BE_REPLACED

Oh, dear. I was just complaining that I might have time to make my own stuff since I was hearing so little about Game of Thrones filming in Northern Ireland, and now suddenly I’m up to my eyebrows in filming news. Oh yes. Oh fucking yes. Both Winter and Watchers are on the case, with shiny new SPOILERS courtesy of Los Siete Reinos! Riverrun is the place to be. YOU FUCKING KNOW IT.