Just the other day, former GOP Clown Car Participant Mike Huckabee got in front of the camera and said something about how to reach out to female voters. These are the words that came out of his mouth (screen-capped from Jezebel): 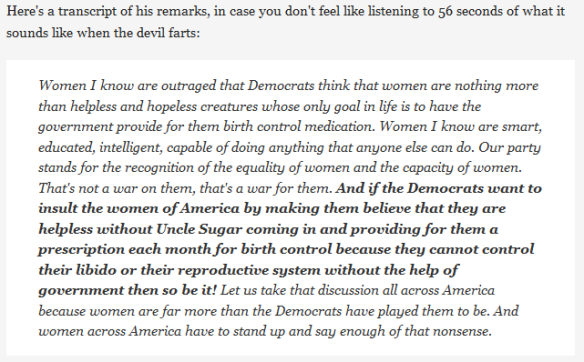 He doesn’t even believe this. His pants have been on fire for so long, he no longer feels a burning sensation.

I will save you the trouble of trying to parse out the meaning behind his rhetoric.

The meaning is that Mike Huckabee is a Fucking Liar.

He slurps down a Bullshit Smoothie for breakfast and shits out nonsense just before lunch. He is the Lyingest Liar Who Ever Lied. He doesn’t just twist the truth or cherry-pick the facts. His message is completely alienated from the Truth. He hasn’t heard from the Truth in years. The Truth filed a restraining order against his sorry candy ass after she finally escaped the chains he’d installed in the secret room in his basement.