I put this off because I focused on writing a quick mash-up of recent S6 promo material for my FanSided presence, and the latest Entertainment Weekly spread was part of that mash-up, but I’d like to focus on the spread itself.

The angle for EW’s coverage was to focus on six ladies to watch out for in Season 6. One could surmise that HBO encouraged EW to focus on female characters as a sneaky way to avoid talking about Jon Snow, but the issue DOES include a sidebar about Jon Snow’s living status. But, you know…maybe they tossed us that little bit of meat to distract us from looking too hard at Jon’s chances of return. There’s merit to the idea that HBO wanted to get the show some nice hefty coverage in EW while aiming the camera mostly away from Jon. Fine.

END_OF_DOCUMENT_TOKEN_TO_BE_REPLACED 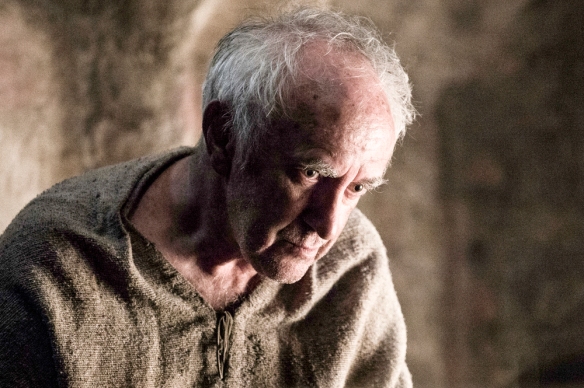 “Yes, I CAN make you walk naked through the streets. Do you want to find out the hard way?”

END_OF_DOCUMENT_TOKEN_TO_BE_REPLACED

A thought just occurred to me, regarding Margaery Tyrell’s new scene partner in S6. (Really, I was just upstairs, getting ready for bed, and this thought came up.)

Basically everyone’s assuming a male character to interact with Margaery. Why are we assuming that? Natalie Dormer didn’t make any reference to gender. It could just as easily be a woman.

END_OF_DOCUMENT_TOKEN_TO_BE_REPLACED

Yeah, so, S6 filming is really and truly done, but we still have cast members doing interviews and they occasionally say stuff about what’s happening, so maybe I still have material for GoT-blogging between now and the S5 DVD release?

The fact that I anticipate having more blogging material with the DVD set should tell you what kind of weirdo I am.
Natalie Dormer said something about having a new scene partner, so that’s fodder for discussion. Sure. Over on Twitter, @BeautyBrienne suggests:

END_OF_DOCUMENT_TOKEN_TO_BE_REPLACED

I’m going to talk about rumors for Game of Thrones S6 filming, which may possibly be spoilers. They’re fairly plausible rumors. Let me show you.