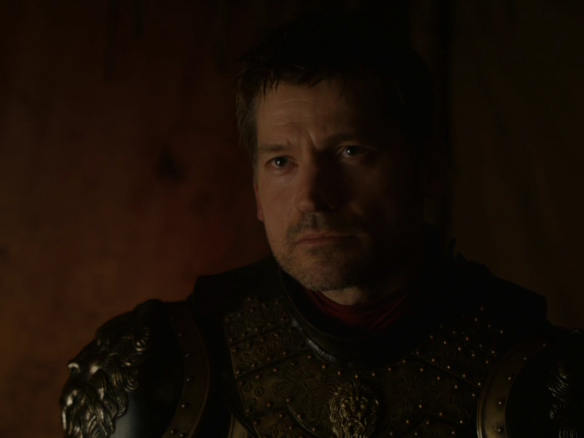 Episode 8, “No One,” drew parallels between long-warring Houses Stark and Lannister.

In Meereen, Tyrion Lannister is having a somewhat better time of getting his young colleagues Missandei and Grey Worm to have fun with him. He tells them a joke concerning three lords who all order ale in the same tavern: a Lannister, a Martell, and a Stark. The punchline appears to imply that Starks have unrealistic priorities, as the Stark lord yells at the fly in his ale to spit it out. The joke is unimpressive, but its inclusion in the episode is noteworthy for the allusion to a Stark and a Lannister in the same tavern and ordering the same ale. “Stark and Lannister: I thought these were enemies,” says Grey Worm, implying that they have been presented as friends. The Martells are now gone, and the Starks and Lannisters are struggling, but they still exist, and Tyrion is not alone in talking about the Starks and Lannisters in terms of what they have in common.

Outside of Riverrun, Tyrion’s brother Jaime has Edmure as his prisoner and seeks to arrange a peaceful surrender. First he tries being generous with an offer to keep Edmure and his wife and child at Casterly Rock, but Edmure starts lecturing him about what a terrible person he is, so instead Jaime leans on his reputation as a man without honor and threatens to catapult Edmure’s baby son into the castle and kill everyone inside it if that’s what it takes to let him get back to Cersei. In between those stages, Jaime decides, for reasons that aren’t entirely clear in terms of moving the discussion forward, to tell Edmure about how his late sister Catelyn Stark reminded Jaime so much of his own sister Cersei. The comparison doesn’t hold water; Catelyn was the mother Cersei thinks she is. The comparison is a callback to Tyrion in Season 4, telling Sansa Stark how much he admired her mother even though she tried to have him executed. It’s also another instance of talking about the Starks and Lannisters in terms of similarities.

The only Stark who’s present in this episode is Arya; the Northern contingent is out of sight. However, Sansa is a topic of much discussion at Riverrun. The main reason why Jaime decided to convince Edmure to surrender the castle was so that he could avoid creating a situation in which Brienne would be compelled to fight him. Aside from the simple reality that Brienne could easily knock Jaime’s head off if she so wanted, Jaime is acting on the terms of his agreement with Brienne (a peaceful surrender) rather than his instructions from Cersei (show them what Lannisters do to their enemies). Inside the castle, Edmure’s uncle Ser Brynden “Blackfish” Tully is looking at another Stark-Lannister connection, as Brienne defends Jaime’s honor and the Lannister-branded sword he gave her to protect Blackfish’s grand-niece Sansa Stark. The letter from Sansa is insufficient to budge the Blackfish from Riverrun, but his reading Sansa’s letter instead of continuing to insult Jaime is the closest Blackfish ever comes to re-examining his priorities.

After that disappointment, Brienne is still determined to serve Sansa. The end result of the mission to Riverrun is that she has no good news to give her lady except that she convinced her friend in the Lannisters not to slaughter the Tullys, and she’s still carrying that Valyrian steel sword he gave her. She tried to give it back, but he insisted she keep it.

Having recently been dismissed from the Kingsguard, Jaime Lannister just made a speech about slaughtering Tullys, taking their castle by force, putting a baby in a catapult, and how much he loves his sister…so that he could avoid a fight with someone he knows is serving the eldest surviving child of Ned and Catelyn Stark, and doing so with a sword he gave her. In an interview with IGN, actor Nikolaj Coster-Waldau describes their interaction:

He doesn’t say [“I hope that doesn’t happen”] because he believes she’ll beat him — which she definitely would — but it’s more that he cares for her, and I think he believes that somehow they must recognize that the other one cares. I’m sure she knows he cares about her. The fact that she tries to give him back the sword Oathkeeper and he kind of says, “It’s yours. It’s always been yours,” the subtext is it’s almost like saying, “You keep my heart. It’s yours. It’s always been yours.”

PS: Yeah, so, I wrote this for FanSided on Monday night, and today it seems they’ve simply chosen not to run it. It’s possible there was a glitch in the system, and I’m the one who caught the glitch, but until I hear otherwise, I will assume this will not be shown on FanSided, so I’m running it here.

ETA: My EIC tells me the piece fell victim to a server migration error at FS, along with some others. Still, I’ll be keeping this post up here until I see it’s been published at FS.

ETA2: A new record. I submit the thing on Monday night, they wait until the following Monday morning to run it, and they backdate it for the previous Tuesday so it doesn’t show up on the front page. This thing was relevant at the time I wrote it, I assure you.