Somewhere between the fourth and fifth interviews I’ve seen Nikolaj give since Monday morning, a thought occurred to me today: this week is the time when the Jaime/Brienne relationship is a Confirmed Canon Romance. They’re no longer interested in being subtle, and they’re now talking to us clearly enough that we no longer have to argue over whether this is a romantic subplot or “just” a friendship between two knights.

In many ways, Season 6 has shaped up to be the Year They Stopped Giving a Fuck. So many little signs of the writers just going balls-to-the-wall in either pointing-and-laughing at the fans or making things blindingly obvious to all but the active denialists. “You want more male nudity, you say? Here’s a close-up of fake!Joffrey’s wang!” “You want Lady Stoneheart on the show? Too bad; the Hound’s pissing in that river and Beric is still around!” “You want Cleganebowl? Go fuck yourself; the Hound’s going north and Cersei isn’t getting a trial by combat!”

“You’re still wondering what kind of relationship is happening between Jaime and Brienne? Have a seat while Bronn tells you they want to fuck each other.” 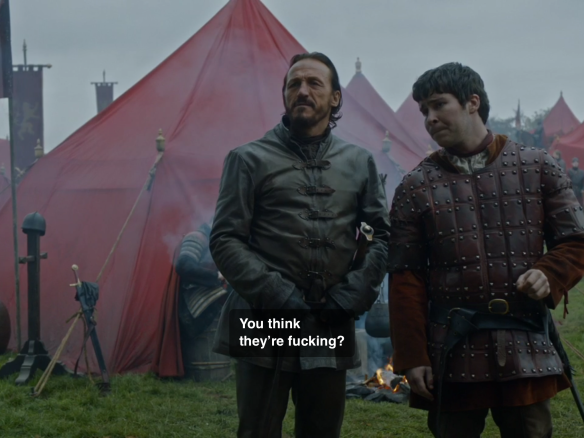 Because make no mistake: that interaction with Bronn and Podrick wasn’t written for no reason. Bronn tends to know what he’s talking about where the Lannister brothers are concerned. That’s a device for the writers to drop anvils on our heads.

Then we had that part where Brienne tries to give back the sword, and Jaime tells her it’s always hers, and later there’s that adorable wave-goodbye in the darkness. Following the episode, the showrunners were telling us stuff like this:

Weiss: Jaime didn’t expect to see Brienne, probably, ever again. He certainly didn’t expect to see her marching into his military camp. And his relationship with her is, obviously, very complicated, and fraught, and has undercurrents that he’s uncomfortable with feeling. Giving her the Valyrian steel sword was no small thing, there are probably, like ten of these things in the world. He’s given it to her, not to carry out one task, or for one stretch of time, but for the rest of her life. I think that’s a symbolic, meaningful gesture on his part, and yet, here she’s honor-bound to point out that they’re not on the same side in this fight. And if it turns to a real fight, they may end up having to, actually, fight one another.

Benioff: It’s these two who are not quite sure how they feel about each other and he lets her go, you know, he’d be well within his rights to send his men after her, to capture her, and it wouldn’t be that hard to capture her, since she’s being slowly rowed away by Podrick. But he doesn’t. She might technically be an enemy now that she’s serving Sansa Stark, who is still, obviously, a suspect in Joffrey’s murder, but she’s not Jaime’s enemy. So, he’s letting her go, and she knows that he’s letting her go, and you know, who knows if they’ll ever see each other again?

IOW: this is more serious than two knights regarding each other with “mutual respect.”

Here are some edited highlights.

I think [fighting each other] would be very, very difficult for both of them. I mean, you have a feeling it might happen. The last bit of this scene they have is basically her saying exactly that. He doesn’t say [“I hope that doesn’t happen”] because he believes she’ll beat him — which she definitely would — but it’s more that he cares for her, and I think he believes that somehow they must recognize that the other one cares. I’m sure she knows he cares about her. The fact that she tries to give him back the sword Oathkeeper and he kind of says, “It’s yours. It’s always been yours,” the subtext is it’s almost like saying, “You keep my heart. It’s yours. It’s always been yours.“

But…Nik, did you really just say that?

Yeah, what I like about it is the scene just before Brienne and Jaime, between Bronn and Podrick, when Bronn says, “Do you think they’re fucking? I know he wants to fuck her. And I’m sure she wants to fuck him, too. So what do you think?” Because it’s that thing when two people are attracted to each other but they refuse to acknowledge that whole elephant in the room, and for everyone else around them it’s pretty obvious.

Nik and Gwen at EW:

“It’s a great scene,” says Coster-Waldau. “These characters are so much about holding their cards so close to their chest, and they don’t want to reveal how they’re feeling. But we know there’s history between them, that this is more than two knights meeting. But they would never acknowledge that.”

Christie tells us fans have been asking if Jaime and Brienne would ever meet again since season 4. “I was excited. It was really fun to be with Nikolaj again, and I thought the way in which their reunion happens is not really expected,” she says. “I just loved that it was so formal, because within the confines of such formality, and having to negotiate with each other, there are so many other stories begging to be told in those moments. There’s a slow process of creeping familiarity among two people who haven’t been together for a long time; it was allowed to build.

Nikolaj at the Daily Beast:

I think there are strong emotions. There’s love there. I think it’s one of the purest forms of love that Jaime’s experienced. The fact that he risks his life to save her from the bear attack, as well as when he stops the rape of her—and loses his hand because of that—is powerful. In the bathtub scene, he opened up to her and told her things he hadn’t told anyone, including the truth of why he killed the Mad King and the enormity of that trauma. For her to embrace him after that was, as I see it, an act of love.

Mark Mylod (director) in The Game Revealed, via Watchers:

…but they DO love each other.

Nikolaj in the same video:

They have a genuine understanding of each other, and in many ways, she gets him on a level that very few other people get him.

Mark Mylod at the Hollywood Reporter:

It had been a long time since they last said goodbye. It’s one of the greatest love stories on television for me. I just absolutely love it. The extraordinary thing for me is that they create such a beautiful, dramatic tension in any two-shot that has Nikolaj and Gwendoline. The way they use their eyes to either connect or disconnect — to avoid each other’s eyes — is so great. They play the black notes of their scenes so beautifully.

TVLINE | We see Bronn and Pod having a conversation outside the tent.
Which is such a great… it feeds the subtext of the scene we’re about to see, because clearly there is something going on between Jaime and Brienne, and clearly it’s something they can’t act on. Maybe in a very secret moment. But they would never verbalize it.

Would never verbalize it…for now, so…tell us more about that “very secret moment”?

With all this in mind…there is no more room for debate on whether Jaime and Brienne’s relationship is a romantic one. It is. They are in love. They haven’t said I-love-you, they haven’t rubbed faces on each other, but they are in love at present and whatever they do together in the future will depend on their feelings.

EDITED LATER: With those feelings in mind, they DO have a future. Nik talks about Jaime wanting to go back to King’s Landing to be there for Cersei, and I’m sure Jaime is thinking he needs to get back to his family, but that doesn’t mean he’ll get there (EDIT: in time to see his son alive). The Lannister army has a feast to attend with the Freys before they can leave the Riverlands, and by the time Jaime’s finished filling out his paperwork with Lord Walder, there’s no telling what’ll happen to Cersei and Tommen. (EDIT: Tommen committed suicide and Cersei cadged the throne.) It’s okay for Jaime to be in love with Brienne and still invested in his relationship with his sister and their last living child, it’s okay for him to be confused about his feelings, but he is in love with Brienne, and—EDIT: he’s not going to stay in King’s Landing long enough to die there without having kissed her at least once.

There’s plenty of room for discussion on what that future may hold. Reasonable people can debate how long they’ll live and how far their relationship will progress, but a relationship is happening, in both books and show. I made the case for it with book-based evidence months ago, but the onus is no longer on us J/B enthusiasts to make the case. Anyone who has seen Episode 8, and heard the showrunners’ remarks, and read those interviews, and still insists there’s no romance between Jaime and Brienne, has actively chosen to be wrong. You can say you don’t like the pairing, you don’t think D&D or GRRM have done a good job of developing the relationship (though regarding the book version, you are objectively wrong and you will lose when I fight you), you don’t think it’ll get very far past initial consummation, but at the end of the day, we now know there is a romance in progress. The primary division is between those who understand that Jaime/Brienne is a romance, and those who know they’re wrong and choose to continue being wrong.

I guess there are still some fans who continue to insist there’s still some chance of Lady Stoneheart being on the show, but…there’s no longer any use in having that discussion. Cleganebowl, same thing: any argument in favor of this is as erroneous as it is uninteresting. Stannis Baratheon still alive? No, that is a non-theory. Arya as anyone except Arya? Asked and answered: negative. We have reached the point at which it is no longer productive to argue over whether the Jaime/Brienne relationship is a romantic one. They love each other. It is known.