Good news for Game of Thrones fans! There’s a big, juicy scene currently being filmed at Castilla Zafra. Not-so-good news: most of the photos being shared from the filming are really blurry.

Some things can be gleaned from blurry photos. Some things…probably shouldn’t be gleaned from blurry photos. At the time I left work this evening, one of the photos posted at Los Siete Reinos was described as “the one on the left is Lyanna” and basically everyone in the comments section at Watchers on the Wall was saying, “no, wait, that’s not a woman wearing a wig, that’s a man in a blue shirt holding a reflector.” Really. Someone expected us to believe that a blue/white object at the left side of a blurry photo was the actress playing Lyanna Stark. By the time I got home, the folks at L7R had changed their tune and WotW had edited their article accordingly. To wit: 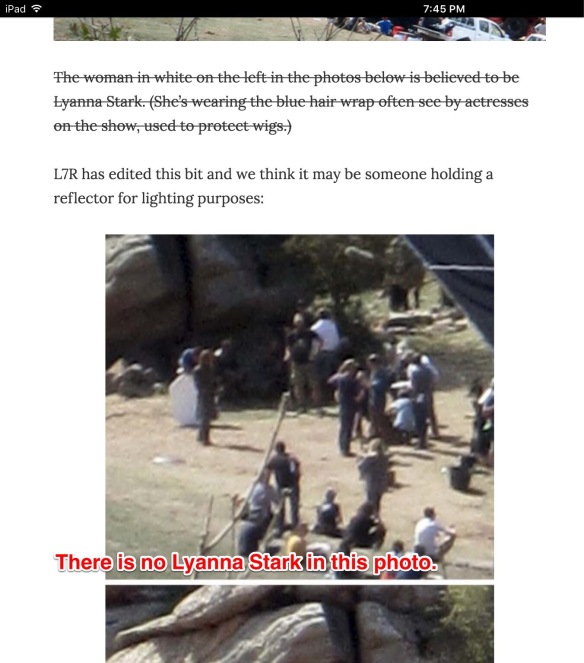 Yes. I think someone is holding a reflector for lighting purposes. When I saw the photo, I basically just said: “WTF? I don’t see anyone who could be Lyanna! Will someone please share some clearer pictures!”

There’s no reason why Lyanna needs to be present in this part of the production. Castilla Zafra is where they’re doing the outdoor part of the Tower of Joy flashback (hi, Bran!), while the indoor part is filmed at a studio in Belfast. The actress playing Lyanna will most likely do all her work at the studio.

The reaction to this blurry photo is just an example of how half-assed evidence can be worse than no evidence at all. What would’ve happened if we’d taken L7R’s word that Reflector Guy was really Lyanna Stark? We’d have to speculate about what it means to see Lyanna outdoors in the Tower of Joy flashback. We’d waste valuable time and mental bandwidth on trying to figure out why Ned Stark’s sister isn’t tucked away inside the tower, bleeding to death after giving birth to Jon. Instead, we should be devoting valuable time and mental bandwidth on who will be interacting with that hapless son to a cruel father.

Seriously, though, I’m not all that emotionally invested in the Tower of Joy, specifically. The significance of seeing the Tower of Joy flashback is that it confirms R+L=J, which hardly even needs to be confirmed at this point. Confirming R+L=J tells us why Jon Snow can’t stay dead, but we have already seen that he’s not staying dead. I do care, however, about knowing when someone is lying, self-deluded, or simply mistaken, and knowing where to find the truth. Another example is the woman under the umbrella at the battle scene at Saintfield. Could she be Carice van Houten? Possibly. Maybe Melisandre will be present at that battle. But I wouldn’t assume she is, based on that photo.