I regard this as one of the Top 10 Jaime Moments of how he’s written in the books. He’s just returned to King’s Landing in A Storm of Swords, and right after he fucks Cersei next to Joffrey’s body (doing so in somewhat less reprehensible a manner than on the show), he goes to see his father. Lord Tywin wants him to quit the Kingsguard and return to Casterly Rock with Tommen as his ward and squire. He’s trying to arrange for Cersei to marry Oberyn Martell, and he suggests Margaery Tyrell as a wife for Jaime, not realizing that Mace Tyrell won’t accept anything less than a king for his only daughter. Which is a moot point, because Jaime is not having it. No, he’s not on board with this plan at all. 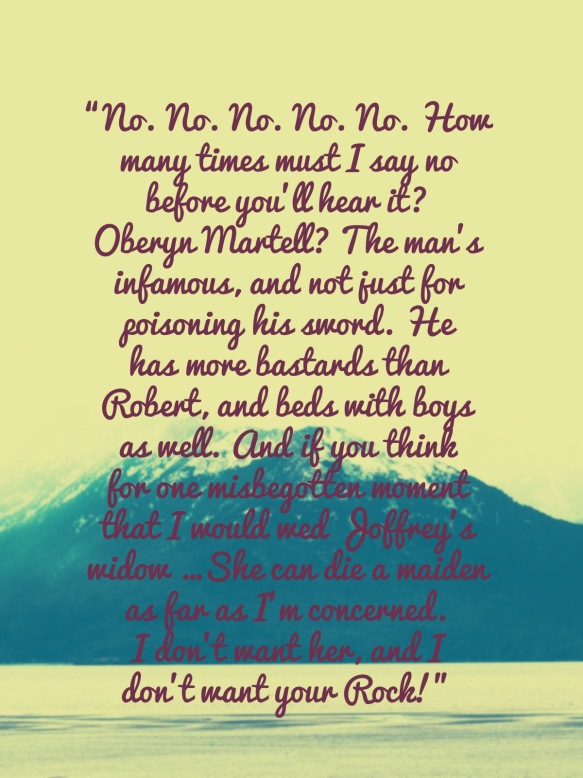 “No. No. No. No. No. How many times must I say no before you’ll hear it? Oberyn Martell? The man’s infamous, and not just for poisoning his sword. He has more bastards than Robert, and beds with boys as well. And if you think for one misbegotten moment that I would wed Joffrey’s widow…She can die a maiden as far as I’m concerned. I don’t want her, and I don’t want your Rock!”

And that was the part where Lord Tywin disowned his first son.

He’s not quite right about Oberyn Martell; he has exactly half as many bastards as Robert, and the younger half of those are Ellaria Sand’s daughters. He does like to fuck dudes, though. Maybe that’s the reason why he doesn’t have as many bastards as Robert. It’s pretty funny that Jaime Lannister, of all people, thinks he can sneer at Oberyn Martell’s choices in sex partners.