Okay, you guys, I lied. Seems I haven’t quite gotten the bug out of my system. I recently started following a certain Facebook page which will remain nameless, and they said something about Cersei’s reference (S4:E4) to “that great cow” and now I just have to do something with that dialogue. And while I’m at it, I’ll do a little something with that, and a couple other moments in which Jaime or Brienne appears to be thinking about the other.

First, we have Season 4. In Episode 1, Cersei complained to Jaime that he took too long to come back to her, and implied that he should apologize to her for having lost his sword hand. Cersei is…special. Now, in Episode 4, she’s grilling him on how he managed to make it out of the Starks’ camp at all. One might get the impression that she would have preferred that he stay imprisoned rather than offer something to his captors.

Cersei is seated at a table, holding a glass of wine. Her line on the show is: “Ever since that great cow brought you back to the capital.” I have added speech bubbles: “While you were making a new friend, I was fucking Lancel. I think you got the better deal, and that makes me angry.”

Or maybe she would have asked him to stay imprisoned rather than let Brienne escort him home.

Brienne is seated on a rock, polishing her sword, while Podrick watches. Her line is: “The only reason you’re here is that Jaime Lannister said you weren’t safe in King’s Landing.” I have added speech bubbles: “Everything seems like a better idea when Jaime asks me up close. Now I have you, but not him, and that pisses me off.”

“Now that you’re here and Jaime isn’t, I’m wondering what in the Seven Hells I was thinking, letting him sweet-talk me into taking you under my wing. I miss him so much; remind me never to listen to him again.

“Also, make yourself scarce while I polish Jaime’s sword.”

Finally, we have S5:E4, in which Jaime’s first appearance of the episode gives us a little Geography lesson of the nothern Stormlands, which serves absolutely no purpose except to give us a gentle reminder that Jaime still has Brienne on his mind. 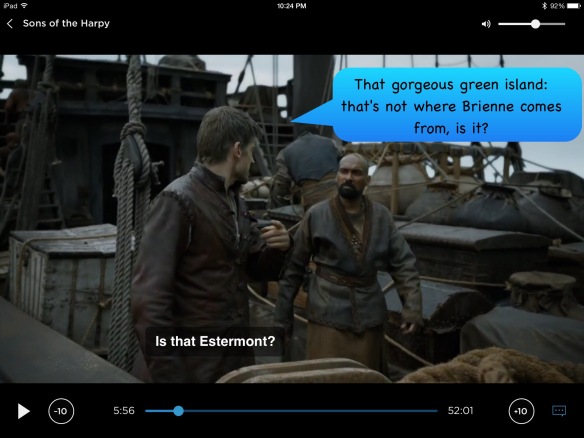 To the extent that anyone enjoys the Northern winter…no. She’s not enjoying it.

The captain says: “The Sapphire Isle.” I have added a speech bubble for Jaime:
“Maybe one day I’ll see her again, and perhaps she’ll forgive me.”

We get a little description of the Sapphire Isle from Brienne’s POV in A Feast for Crows:

No land could have been more different from Tarth, with its mountains and waterfalls, its high meadows and shadowed vales, yet this place had its own beauty, Brienne thought.

After they’ve survived the war, perhaps she’ll show him around those mountains and waterfalls.