Next up, Season 3 Episode 2, when Jaime behaves like a ripe jackass by attacking his protector with a longsword even after he’s seen her go all Valar Morghulis on three Northmen. If I sometimes write about Jaime like he’s a 15-year-old boy running around in a 40-year-old man’s body, it’s because I think that’s a charitable way to explain much of his behavior.

How else to describe a guy who pulls a sword on a diligent protector, when he has already seen what a good fighter she is, and she’s one of the few people in the Riverlands who want him safely returned to his family? 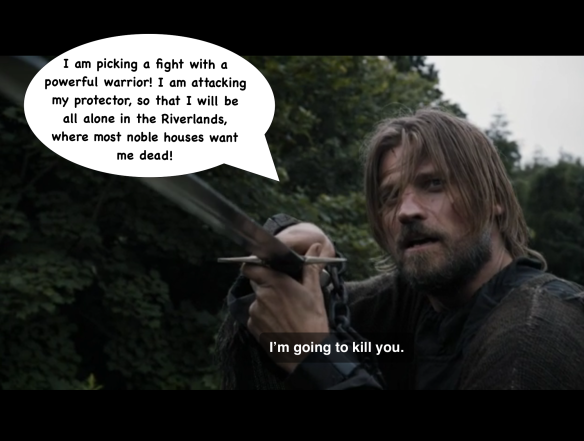 Jaime holds up a sword, and tells Brienne: “…I’m going to kill you.” I have added a speech bubble: “I am picking a fight with a powerful warrior! I am attacking my protector, so that I will be all alone in the Riverlands, where most noble houses want me dead!”

My sarcasm is occasionally mistaken for sincerity, so I’ll make a full disclosure: the speech bubble I’ve added to the next screenshot is meant sarcastically. That fuzzy, hyper-saturated filter on the photo is what I call the Sarcasm Effect.

Jaime and Brienne are swinging swords at each other. I have added a speech bubble for Jaime: “My daddy will be so proud when he hears about this! I have absolutely thought this through!”

…and he soon discovers that his protector is stronger, quicker, more competent and more tireless than he ever imagined a woman could be, and unlike him, she doesn’t make the mistake of underestimating her opponent.

Jaime’s getting tired. He holds up his sword at Brienne, and says to her: “See, if you were willing to hurt me, you might have had me there.” My speech bubble says: “I’m seriously beginning to reevaluate my life choices.”

By this point, Jaime has completely forfeited any right to criticize Brienne’s protection skills. While they were dueling on the bridge, Lord Bolton’s soldiers caught up to them. 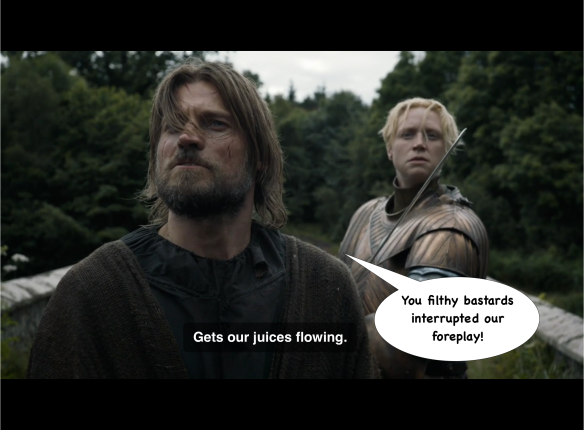 They both face the camera, Brienne holds up a sword, and Jaime says: “We like a good fight. Gets our juices flowing.” I have added: “You filthy bastards interrupted our foreplay!”

The innuendo at the equivalent scene in the books is even more obvious. I’m not the one who wrote Jaime saying to the Brave Companions: “You caught me chastising my wife.” Or him thinking to himself: “She looks like they caught us fucking rather than fighting.”