Now we move on to Season 2, Episode 10, in which Brienne is walking Jaime around on a leash while he makes increasingly inappropriate attempts to learn about her life. I might feel slightly ashamed of myself for doing this except that I’m not the one who wrote the scene with Jaime offering, pretty much in as many words, to fuck his protector.

This is the part where Jaime says to Brienne: “One or two must have tried to get inside Big Brienne.” And my contribution is: “Now let’s talk about your sexual history.”

And if she doesn’t have any sexual experience, then he’s offering to give her some. 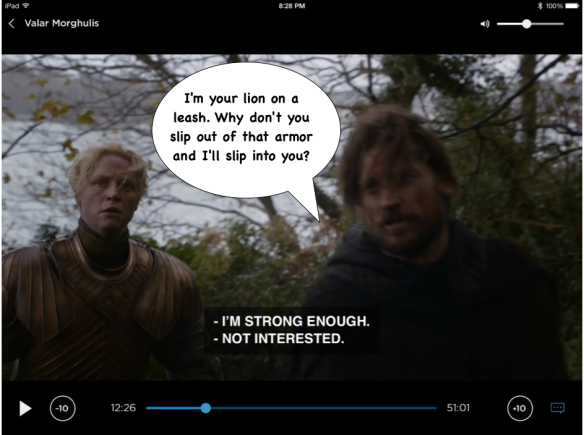 He says: “I’m strong enough.” She says: “Not interested.” I say: “I’m your lion on a leash, so why not slip out of that armor and I’ll slip into you?”

SORRY NOT SORRY. I don’t think he’d want Cersei to hear about this conversation.