#BlameOneNotAll is a tag that begs to be derailed, so I joined in the fun this afternoon. Soon enough, this reply appeared in my interactions. 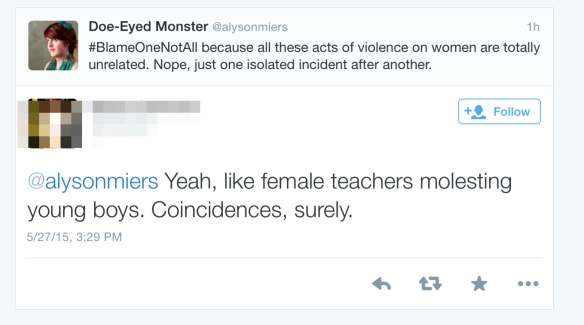 My Tweet says: “#BlameOneNotAll because all these acts of violence on women are totally unrelated. Nope, just one isolated incident after another.” I’ve blurred out the profile pic and username of the person who replied to me. Their response is: “Yeah, like female teachers molesting young boys. Coincidences, surely.”

No, I didn’t engage with this user. I can think of about 100 things I’d rather do with my time—pull my toenails off with pliers, for instance—than get sucked into an argument with an anti-feminist. Nope, this exemplary character kept on popping into my mentions, and I kept on Tweeting.

I’m just showing off this one reply as an example of how some of us have different reasons for doing what we do.

Some of us do talk about sexual violence with male victims and female perpetrators, as it comes up. Maybe not as often as we should! But when we talk about it, we do so because we see female-on-male violence as part of the same system that enables male-on-female (and male-on-male, etc.) violence. We talk about it because we care about men and boys as our fellow human beings and we value their vulnerabilities. We sometimes ask, “But seriously, what about the men?” without irony, because bodily autonomy matters for everyone or it matters not at all. We object to abuses such as female teachers and other authority figures molesting boys because all children should grow up free of abuse.

And then some people bring up male victims with female assailants as a dishonest “Gotcha!” tactic on feminists. It’s all a question of priorities.