Seriously, though, I still want to talk about that rape scene in Episode 6. I’ll get off my previous attitude of snarking at anyone who objects to the scene, and instead talk about what we can gather from the fact that it happened and the way it was portrayed. Amanda Marcotte says many of the things I’ve already said, and some more. I still think there’s space to criticize the way Game of Thrones handles sexual violence. If some people have just had it up to their eyebrows with seeing women get raped and beaten on TV and don’t want to see any more, then I understand their decision to quit watching Game of Thrones. If you’ve decided not to watch anymore because you’ve had more than enough of this shit, then you’re not the intended audience for this post.

I just want to take a close look at Sansa and ask: what kind of story does this encounter tell us?

(This post has ended up longer than I expected. That’s a thing that tends to happen in my writing. Sorry!)

I think the overall message is that abusers are able to get away with abuse for as long as they do because the system supports them, and they know what they’re doing.

As I’ve said before, Sansa’s biggest problem is that she has always been and done exactly what society expects of her as a lady. She wasn’t a fierce little tomboy like her sister, and no one was the slightest bit interested in teaching her to be anything other than a sweet little avatar of noble femininity. Courtesy is her only armor and tears are her only weapon. Her reward for being “always courteous and eager to please” has been to go through a revolving door of abusers ever since her father was executed. First she kept herself alive with Cersei and Joffrey, then Littlefinger and Crazy Aunt Lysa, and now the Boltons.

Part of the way I understand Sansa’s position at this point is that Littlefinger is a much more cunning abuser than Cersei ever was. Littlefinger let Sansa believe that she was choosing to escape King’s Landing with him, but he also made it so that his escape plan was her only way to stay alive. I don’t remember whether it’s been disclosed in so many words on the show, but Littlefinger hired the jousting dwarf act as entertainment at Joffrey’s wedding. He did that because he knew how Joffrey would respond, he knew how it would make Tyrion look when Joffrey died, and he knew how Cersei would react to the circumstances. He knew that if Sansa didn’t vacate the premises straight away, she would be arrested and possibly executed along with Tyrion. He controlled the conditions around Sansa so that he was her only option for survival. Once he had his Little Bird in hand, he took her up to an isolated castle where he began molesting her, which resulted in her paranoid, jealous aunt nearly killing her.

With that in mind, I don’t think that much of anything Sansa’s done in her time with Littlefinger has been an especially empowered choice. I’m sure she feels like Littlefinger is allowing her to be an adult and make decisions, but really, she hasn’t had a chance to exercise much agency. The one time when she had a chance to make something happen was when she told the Lords Declarant that Petyr Baelish was such a great guy and Aunt Lysa committed suicide. There, she proved that she can lie effectively, and her lie just happened to allow Littlefinger to escape consequences for his actions. In telling that lie, Sansa may have proven to Littlefinger that he’d underestimated her, and that she had blackmail material on him, but even so, she kept them together. Since then, all the choices Sansa’s made have been more of what she did at the Red Keep: using her social skills to hold shit together and stay alive. Courtesy is a lady’s armor, and she keeps hers strapped firmly on at all times.

Her demonstrating her lying ability may have altered their dynamic, but ultimately Littlefinger is still the one pulling all the strings. When Brienne appeared at the inn and offered her protection, Sansa didn’t want it, but what would’ve happened if she’d accepted? There was no way Sansa could have left with Brienne without Littlefinger sending his knights after them. He sent his knights after Brienne when she tried to leave by herself! If Sansa had rejected the betrothal to Ramsay Bolton, Littlefinger would have found a way to force her hand. Much of Littlefinger’s gift as an abuser is his ability to convince Sansa that she’s in control. His grip on her is tighter than she realizes.

He was able to get that grip on her in the first place because she was trapped at the Red Keep with the Lannisters. Tyrion was nice to her (more on that in a bit), but the longer she was in that marriage, the more she was under pressure to give birth to Tywin Lannister’s next grandchild. It was an inherently abusive situation for both her and the God of Tits and Wine. She still had Joffrey threatening to rape her and Cersei being her usual asshole self. All it would take to turn that situation from “unpleasant” to “deadly” would be for something bad to happen to Joffrey without the cause and culprit being immediately obvious and transparent.

One abusive situation led to another, and that one led to her current predicament with the Boltons. Roose Bolton hasn’t laid a hand on Sansa, but he’s an enabler of his son’s sadism. Ramsay exists because Roose Bolton raped a peasant woman. If someone told him how Ramsay treated Sansa on their wedding night, Roose would most likely applaud his son’s restraint. Westerosi culture doesn’t acknowledge that marital rape is a thing.

Meanwhile, Ramsay has groomed Theon even more thoroughly and radically than Littlefinger has groomed Sansa. He has mutilated, tortured and mentally broken the one-time Prince of Winterfell. He’s done this by teaching Theon that however bad he may be treated while he’s loyal to Ramsay, he’ll suffer much worse if he isn’t loyal. The months of torture have completely destroyed Theon’s confidence and sense of self. In order to get himself back, he’ll need to forge a connection with someone who wants him to be Theon, not Reek. He needs a good person to believe in him, and I may even be so radical as to say he’ll still need time to recover. Ramsay was able to abuse and recondition Theon because Theon had done shitty things and lots of people wanted him dead. He was isolated and unsupported as a consequence of his own decisions.

I think he’s suffered more than enough, though, relative to the shitty things he’s done. He’s more than given his pound of flesh. (And no, I will not stoop to condoning puns about how many ounces of flesh were cut off.)

Sansa is isolated as a consequence of other people’s decisions. She lives in a cultural context in which women are expected to be defenseless against violence and dependent on men, and holy shit, she is dependent on certain men who have made claims on her body and land, and she is unable to defend herself against their violence except to the extent that she can head them off in the first place with her courtesies.

That brings us to the wedding. Once she agreed to marry Ramsay Bolton, there was no way she’d be allowed to back out. Once they did the ceremony, there was no way she’d be able to go through the night without spreading her legs for her new husband. Her consent was irrelevant by that point, and he could have theoretically asked her nicely and handled her gently, but this is Ramsay we’re talking about. Instead of asking her nicely, he interrogates her about her marital history, and I am interested in why the showrunners made this conversation a part of the scene: 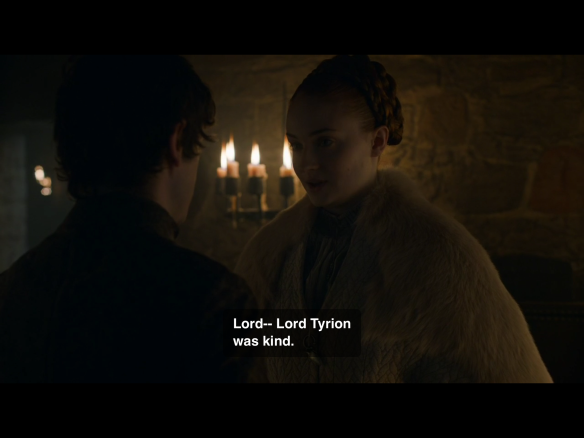 What, indeed, is the narrative purpose for them to talk about how she didn’t have to spread her legs for Tyrion?

It’s a compare & contrast between her new abusers and her old ones. Tyrion couldn’t protect her once he was arrested for Joffrey’s murder, but for a short while, he could limit the amount of time she spent around Joffrey and Cersei. The Lannisters abused and exploited her, but Tyrion wanted to keep her safe and healthy, and she knows it.

This time, the one she had to marry is the worst of the family. I think the message behind the compare & contrast is: it can always get worse. There’s always someone worse than the Lannisters. An abuse victim won’t suddenly become free of her abusers simply because she’s long overdue for a change in her fortunes. She can’t escape just by force of personality. She needs to have good people on her side, and she needs to know that the consequences of staying will be worse than the consequences of leaving.

It certainly isn’t fair that Sansa apparently still hasn’t gotten to a place where she won’t be raped, so…no, what’s happening to her isn’t fair, but unfairness is all around us. The fact that rape and domestic violence are things that happen all the time, is incredibly unfair. Every hour, all across the world, rapes are happening. Some of the victims in those attacks fight back, and some don’t. Sometimes, fighting back is the smart thing to do, and sometimes, closing your eyes and getting it over with is the smart thing. Sometimes you can’t tell which is the smart thing to do until you do something. Both those who fight back and those who submit are equally worthy of our compassion. In Sansa’s case, she did not fight back, she cried through her rape and otherwise didn’t put up a fight, and in those conditions, that was the only smart thing to do.

If she’d done something else, like, say, pull a dagger on Ramsay, that would’ve been cool to watch, but it also would’ve been unbelievable. There’s fantasy as a setting, and then there’s completely unrealistic and implausible events for the context. Sansa putting up a successful fight against Ramsay fucking Bolton would’ve been implausible. We’ve already seen what he did to Theon. If you’ve read A Dance With Dragons, then you’ve seen what he does to Jeyne Poole. Nobody ever taught Sansa how to handle a dagger. Nobody ever taught her how to fight, and hardly anyone is equipped to put up an effective fight against Ramsay. She did what it took to get through her wedding night with minimal injuries. She managed her risks wisely.

Her experiencing a completed rape is of a piece with everything else that’s happened to her since the end of Season 1, but her situation has changed in some important ways. By leaving Sansa to fend for herself with the Boltons while he deals with Cersei, Littlefinger has dropped his grip on her. By forcing Theon to watch (and there was no effing way Theon could have believably fought for Sansa at that point), Ramsay has inadvertently forged a new connection between his Reek and his bride. Winterfell is no longer under the control of the Starks, but there are still servants in the castle who care about Sansa, and she knows it. She has instructions to light a candle in the broken tower. What we saw last Sunday wasn’t pretty, but it may very well have been her turning point.