I told you I was working on a book/show comparison on this scene. Here it is. My obsession marches on.

I wanted to do a video about this. I went so far as to get all dolled up and record myself, and then I realized that I really, really do not like the sound quality on my MacBook. I wouldn’t want to sit through listening to that video, and I wouldn’t ask you to sit through it, so instead I had a little fun in Notegraphy and put this together.

Remember the bath scene at Harrenhal? I think you all know the one. Season 3, Episode 5, called Kissed by Fire, the scene starring Nikolaj Coster-Waldau, Gwendoline Christie, and their magnificent backsides. I know we’re in Season 5 now, but it’s never too late to talk about our big stubborn swordswench and her one-handed knight. In case it wasn’t obvious from some of my earlier posts, I really, really like the romantic storyline that’s going on between these two characters. This is the part where I stop being subtle about my enthusiasm for this pairing.

I don’t think of myself as “shipping” Jaime and Brienne, because GRR Martin ships them and I just look forward to it. Their infamous bath scene is the most visible of their relationship development that appears on the show, so I figured it would be fun to explore in a compare/contrast. This is one place where the book and show are extremely similar, but of course the show doesn’t give us what’s going through Jaime’s head, and even the small differences are interesting. So! See my citations for a lot of information that isn’t in the show.
The background going in is that Jaime’s stump is infected, so he’s running a fever and he’s generally in really poor health up through his visit with Qyburn, so Brienne’s basically been playing the role of nurse. I’m sure that’s not what she had in mind, but…he needs someone to take care of him, and as she’s the only person on the scene who isn’t absolutely terrible, it’s just as well that their captors put her on the job. So by the time they arrive at Harrenhal, Jaime has spent a lot of time tied up to Brienne on horseback with their captors making gross comments.
Once Qyburn’s sewn up his stump, Jaime goes straight to the bath house and finds Brienne already in the tub. He needs that bath a lot more than she does, so he doesn’t wait around for her to finish, and the first thing he does, once he’s out of his clothes, is order the guards out of the room. He says to the man attending him: 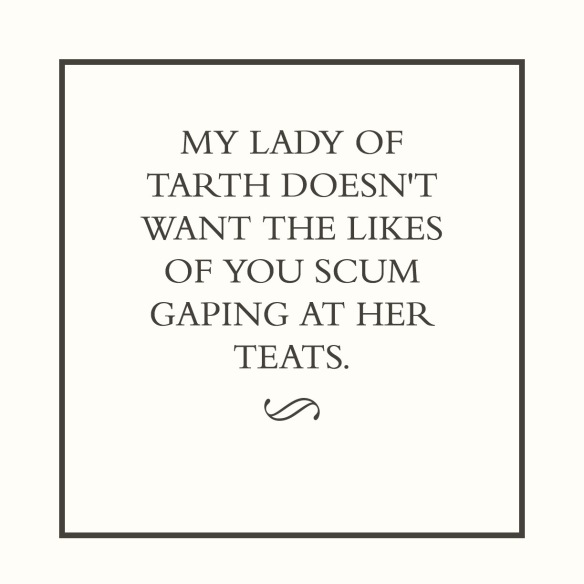 MY LADY OF TARTH DOESN’T WANT THE LIKES OF YOU SCUM GAPING AT HER TEATS. (Oh, he totally says that to the guard. You know it.)

There’s also a woman standing over Brienne, and Jaime tells her to wait outside, too. She obeys.
He heads for the tub, Brienne tells him there are others available, and he basically says to her, “I prefer the one that has you in it.”
This is probably the most vulnerable Jaime’s ever been in his adult life, so it’s not surprising that he wants to have his protector nearby, but it’s interesting that he insists on being alone with her.
Ever since his first day in her custody, Jaime’s been trying to get some reaction or other out of Brienne, and he keeps at it once he gets in the tub. He taunts her, he says something unworthy about her guarding Renly, and she takes it worse than he anticipated.
Brienne is a bit more confident on the show, because when Jaime goes there, she stands up in the tub and glares at him, all like, “I don’t need to put on clothes to kill you!” But in the book, she gets OUT of the tub, and wraps herself in a towel, and that towel makes an important difference! I’ll get back to that in a minute. Two things happen with Jaime as she gets out of the tub:
First is he thinks to himself, “This one’s hairier than my sister.” It’s not the first time he secretly compares her to Cersei, and it’s not the last.
Second is that he gets a little erect under the bathwater, and is immediately horrified at himself for having this response, so he tells himself,

NOW I KNOW I HAVE BEEN AWAY FROM CERSEI TOO LONG.

Yeah, Jaime, you think something’s wrong with you getting a hard-on for an unrelated younger woman who’s been taking care of you while you’re wounded and sick, but you totally feel good about fucking your sister! Makes perfect sense.

In which I hold up the word “ASSHOLE” in sparkly blue handwritten letters alongside my own heavily painted face.

Either way, when he tells her he’s not interested? Not entirely true.
But anyway, Jaime sees that he’s cut Brienne deeper than he intended, so he apologizes to her, and asks to call a truce, and he tells her the story of why he killed the Mad King. The story takes longer in the book, but the difference is mostly in the level of detail. That whole time, Brienne is standing at the edge of the tub, wrapped in a towel and looking rather ridiculous, and Jaime still needs a reaction from her.
He gets to the end of killing the Mad King, and he asks Brienne to please say something, anything at all, and that’s the part where she asks why nobody else apparently knows this story. And Jaime gets started on how Honorable Ned Stark didn’t want to hear his side, and that gets him pissed off all over again: “By what right does the wolf judge the lion?”
So he stands up way too fast, and faints, and of course this happens:

Brienne is covered in water droplets; she holds Jaime in her arms just above the water’s surface.

As she’s pulling him out of the tub, Jaime notes that he didn’t expect her to be so gentle. He goes so far as to think she’s:

GENTLER THAN CERSEI. GRRMartin wrote that, not me.

Wait, did he just compare her to Cersei again?
Yes?
And this time Brienne is the one he prefers?
Well, I’ll be dipped in shit.
Meanwhile, Brienne’s summoning the guards. Next thing Jaime knows, he’s laid out on the floor of the bath house, surrounded by Qyburn, the two guards, and Brienne, who is so focused on making sure Jaime’s okay that she doesn’t seem to notice that she’s naked in front of everyone.
I think she dropped her towel when she ran up to catch Jaime as he fainted.
Qyburn decides it was the heat of the tub that made Jaime faint, but either way, Bolton is expecting him for supper and time is running short. Brienne volunteers for more caregiver duty, and the guards are all like, “Yeah, we’ll let you do that.” She puts her towel back on, gets a brush, the guards find her a razor, and she scrubs him clean and trims his beard while Qyburn is off finding clean clothes for them both. She helps him dress. And it’s time to go upstairs to let Lord Bolton watch Jaime fail at dinner. A guard asks Jaime if he needs to be carried. 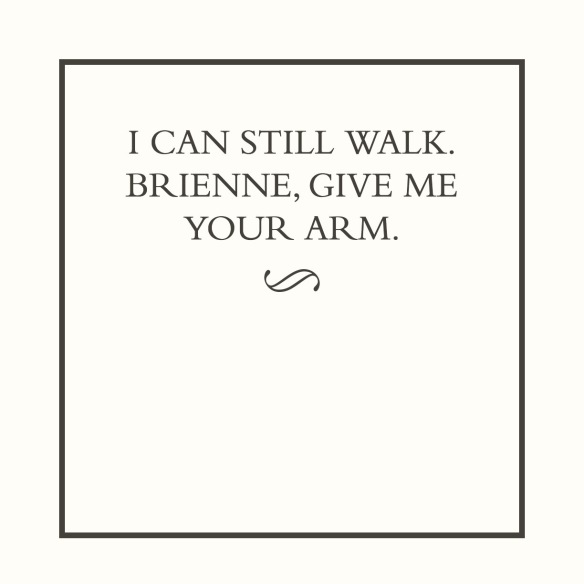 I CAN STILL WALK. BRIENNE, GIVE ME YOUR ARM.

I think that’s so sweet, how Jaime has no problem letting Brienne see how helpless he feels, because he knows it’s safe to lean on her.
Months later, Brienne is up in the Riverlands on her quest to find Sansa. Podrick hasn’t joined her yet, and she’s staying at an inn one night, she’s taking a bath in her room, and she thinks back on that bath with Jaime at Harrenhal. She recalls him walking through the steam, as naked as his nameday, and he looked… 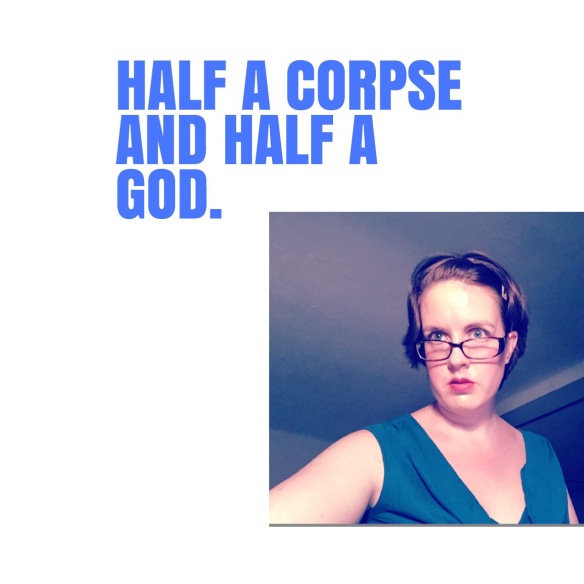 HALF A CORPSE AND HALF A GOD. Next to my face, looking all intrigued.

If Brienne told Jaime at this point that he’d looked that way at the time, I’m sure he’d say to her: “Only half a corpse? I must have looked better than I felt.”
If you have a couple hours available, I suggest you read my earlier post, about Jaime losing his hand, for additional context around these events, if you haven’t already read it. Thanks for stopping by my blog, and I hope you’ve enjoyed my book/show comparison on Jaime and Brienne’s bath.