I am enjoying this entirely too much. Quick, let me write this here post before HBO releases the third episode and I get some other shiny thing to chase!

S5:E2 gives us our first glimpse of Bronn’s wife-to-be, Lollys Stokeworth. Tyrion had called her “dim-witted,” and she appears to be unsophisticated, but Bronn likes unsophisticated just fine. Especially if it comes with lands and titles.

The Stokeworths are a minor family in the Crownlands, regularly seen at court. There’s an elderly mother, Lady Tanda, with two grown daughters: the older one, Falyse, who is 40 and has no children to show for 10 years of marriage, her husband Balman, and the younger one, Lollys, who is 34, still maiden, and is known as “Lollys Lackwit” for a reason. When we see Lollys in the books, she’s not just a silly girl who prattles on about wedding plans. She appears to have the cognitive capacities of a small child. I’d put her mental age in the 3-5 range. Lady Tanda tried to get Tyrion to marry Lollys at one point. Tyrion wasn’t having it.

So, the first we hear about Lollys on the show is that she’s about to become Bronn’s new wife; Cersei arranged their marriage to persuade Bronn not to testify on Tyrion’s behalf at the trial for Joffrey’s murder. This is faithful to the books! Bronn the lowborn sellsword gets a highborn wife, Lollys the dim-witted younger daughter of a minor house gets an appreciative husband, and Cersei gets to rob Tyrion of one of his staunchest allies.

What the show leaves out of the equation is that Lollys was gang-raped during the riot in Flea Bottom. She gets separated from her mother while the mob attacks, and since she’s mentally handicapped, she’s unable to stay out of the way or defend herself. She gets pregnant in the ordeal. And that adds another layer of economic and sexual politics to her match with Bronn. Since Lollys is no longer a virgin and has a bastard on the way since a crowd of violent peasants ganged up on her, she’s even more undesirable as a wife to any self-respecting nobleman. So that makes her mother even more willing to marry her younger daughter off to pretty much any knight or lordling who’ll touch her. Where most highborn men see damaged goods that were never high-quality to begin with, Bronn sees another benefit: proven fertility. Lady Tanda gets a mate for her otherwise unmarriageable daughter, Lollys gets a stepfather for her bastard, and Bronn gets a pliant wife who can give him children with lands and titles. That he’s expected to fuck someone with the mind of a toddler doesn’t seem to bother him.

The marriage is used in the text to drive home, in case we hadn’t already noticed, that Bronn is a mercenary, bloodthirsty killer, perfectly happy to force Lollys’s older sister Falyse out of the castle after killing Falyse’s husband, Balman. Which allows Bronn to take over Stokeworth Castle and style himself Lord Stokeworth. And that also means that any children he has with Lollys will be first in the line of succession to the Stokeworths’ lands and titles. And he’s sure he’ll have children with Lollys because she has proven fertility.

HBO’s Lollys isn’t nearly so impaired, is apparently not pregnant and presumably did not suffer a rape in Flea Bottom. And when Jaime shows up at Stokeworth, she and Bronn are still planning their wedding. And that means Bronn’s plans for world domination get ripped out from under him, because Jaime has already put the kibosh on his love match. This is the part where Bronn says to himself: “These fucking highborns.” 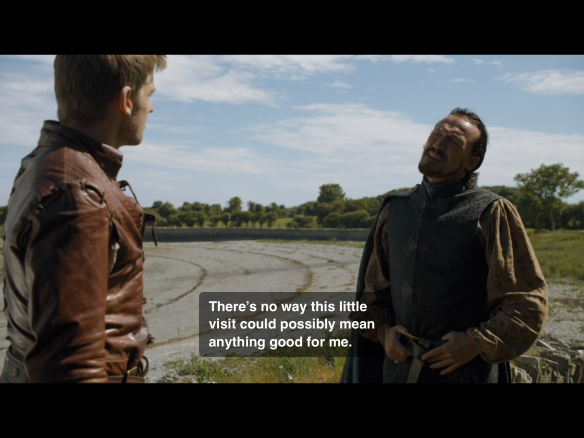 Bronn says to Jaime: “There’s no way this little visit could possibly mean anything good for me.” And he’s right. He had a good thing going with his sweet dim-witted Lollys and Jaime came along and fucked it up.

Sure enough; Bronn thought he’d finally quit the Lannisters, but they can’t quit him. Jaime has already arranged for Lollys to marry someone named Willis Bracken, and he’s promising to find Bronn a better bride with a better castle. But first Bronn is going to be the muscle for a little trip to Dorne.

All that is fine. Jaime’s trip to Dorne is a major divergence from the books, so some other elements will need to change along with it, and I guess the show’s creators aren’t interested in showing how far Bronn will go to become lord of his own castle. (Minor digression: Cersei is so full of shit with her telling Jaime he was never a father to Myrcella. It wasn’t his idea to keep his distance from the kids! He was only as cautious as Cersei wanted him to be.) He has decided to get his daughter away from the Martells, but he can’t bring an army with him, and he can’t very well go cavorting around Sunspear all by his one-handed lonesome. He needs a capable combatant with him who won’t make a lot of noise. He figures he needs Bronn more than Lollys does. Sure, that makes sense. It’s kind of sad that we don’t get to see an exchange like this one, however:

Pycelle looked desperately uncomfortable. “There has been a bird,” he said. “From Stokeworth. Lady Tanda sends word that her daughter Lollys has been delivered of a strong, healthy son.”

“And you will never guess what they have named the little bastard, brother.”

“They wanted to name him Tywin, I recall.”

“Yes, but I forbade it. I told Falyse that I would not have our father’s noble name bestowed upon the ill-gotten spawn of some pig boy and a feeble-witted sow.”

“Lady Stokeworth insists the child’s name was not her doing,” Grand Maester Pycelle put in. Perspiration dotted his wrinkled forehead. “Lollys’s husband made the choice, she writes. This man Bronn, he … it would seem that he …”

The old man gave a tremulous nod, mopping at his brow with the sleeve of his robe.

Jaime had to laugh. “There you are, sweet sister. You have been looking everywhere for Tyrion, and all the time he’s been hiding in Lollys’s womb.”

“Droll. You and Bronn are both so droll. No doubt the bastard is sucking on one of Lollys Lackwit’s dugs even as we speak, whilst this sellsword looks on, smirking at his little insolence.”

Those Lannisters, I tell you.