This here is the sum total of an interaction I had with some dude who is more than old enough to know better. Yes, he opened with THAT. 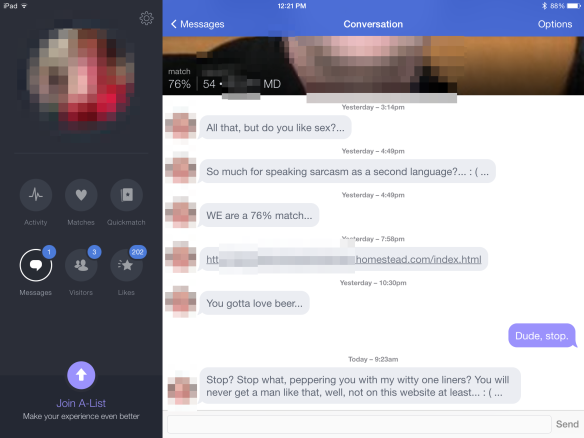 I consider a 76% match too low. This guy isn’t making me feel differently.

“You will never get a man like that.” Heeee! Funny, how I’ve had plenty of conversations with people who didn’t think it was cute to begin a conversation with, “But do you like sex?” Yes, even on OKC! I’ve been on the site long enough to have found many perfectly decent people using it. This one is far from the worst, but he’s hardly the best it has to offer. I’ve already attracted the notice of a number of people (both men and women!) who have better social skills and more respect for boundaries than Mr. 76% Match.

Commenting on the supposed ridiculousness of the site doesn’t make your asshattery any more charming.

Oh, and I hear from 22-year-olds who behave more appropriately than this 54-year-old.