No, I do not live under a rock. I heard about the Trevor Noah controversy days ago. I simply didn’t follow any links until now. So I just read a few articles on Noah’s old Twitter jokes, and, sure, I see space for criticism and also space for defending him against criticism. For reference, I’ve capped a sample of Noah’s problematic Tweets from this Vox piece: 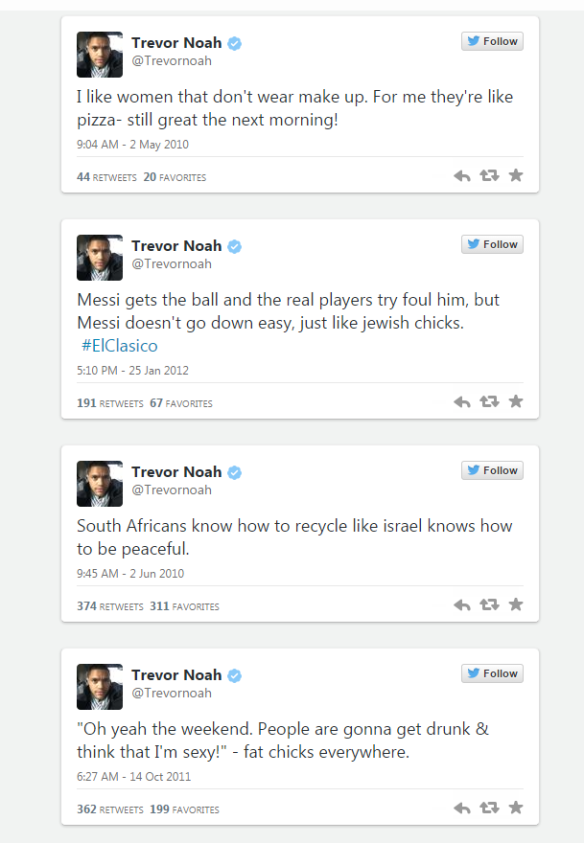 A series of old, mediocre jokes posted on Twitter.

I basically agree with Alexandra Petri’s take on the Noah situation:

Yes, that was the problem. It was that he was not allowed to joke about anything. That was why people were upset, because he was too provocative, with his fat-girl jokes, that provocative area of joke-making that has never been mined before and is full of taboos. How dare he force us to question our assumptions with his bold, daring comedy that entirely reinforced all our beauty standards? Usually people joke about anything but women as sex objects. They are just plain off limits, because it is such an edgy, un-mined subject, and we are afraid of speaking truth to power, and he is boldly going where no one has gone before.

Two things jump out at me about the Tweets shown in the Vox article (which is more harshly critical of Noah’s choices in jokes): 1) Look at those timestamps. He posted those jokes YEARS ago. He may have learned some things since then. 2) My reaction to those jokes is mostly “meh.” They’re not especially hurtful, they’re not vicious or violent, they’re just bland. Like Petri, I am not offended so much as bored.

If you asked me for my analysis of the oppressive forces behind Noah’s choices in humor, I’d say the biggest problem is the sexism. Criticizing Israel for violence is fair game. That is not down-punching humor. I won’t comment on to what extent Noah, having Jewish heritage, is allowed to make Jew jokes, but the humor in the Tweet about Messi leans more heavily on sexism than on anti-Semitism. And then there’s that last one in my screencap. Let’s point and laugh at fat women for thinking they can be sexy! So very edgy and clever, wow! Uh…no. THAT is punching down, and in a way that already saturates the air we breathe. Up your game, dude.

I don’t think any of this should disqualify him from hosting The Daily Show. I also don’t think anyone’s wrong for pointing out that some of his jokes have been lazy and obnoxious. It should be okay for comedians to mess up and learn from their mistakes. It should also be okay to point out when comedians make mistakes! It should be okay to point out when humor punches down and makes the world a shittier place! Otherwise there’s no learning. But I also have to wonder about those time stamps. We’re mostly harping on things he said years ago.