A handful of little birds told me about these messages received by various women around OKCupid, and I agreed to use them as examples in a post of What Not to Do in Online Dating, Dudes.

Oh, who am I kidding? There is no “little bird told me” here. These all came to my inbox. These are all recent additions to your blogger’s experiences in online dating.

I’m giving advice that applies to everyone seeking everyone, but since I’m a woman who gets messages mostly from men, I’m going to frame this as advice to men seeking women.

First on the docket is this guy: 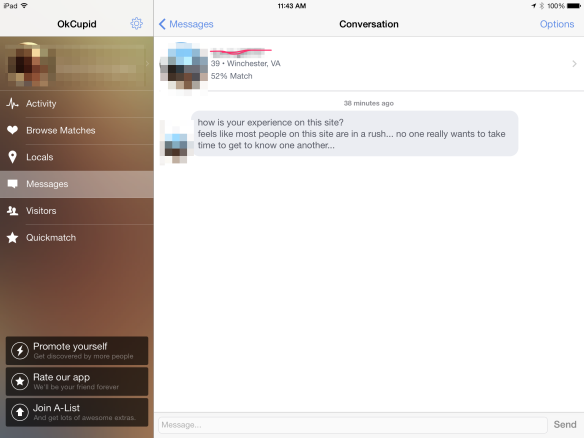 At first I thought maybe I’d reply to this guy as an experiment. I’d tell him about how annoying it is that I keep getting messages from guys who don’t appear to have read my profile, and see how he responded to that.

It’s a sign of how jaded I am, as a woman who sees (and sometimes experiences) the range of skeevy shit that men pull to try and pressure women into opening up to them. My first impression of this message was that this user was trying some PUA shit, similar to “negging,” in which he’s trying to get me to respond and show him that I’m not like all those other, soulless online daters who can’t take the time to get to know someone.

Like I said: jaded. This is no country for Pollyanna.

I’ve decided against engaging with him, though, because he very well could be sincere. He might be genuinely put off by his experiences in online dating and just wants someone to talk to.

Doesn’t mean I’m going to become his new friend, though.

I’ll tell you what really does irk me about this message, regardless of my assuming the worst of his motives: there’s no sign that he has actually read my profile. I can’t tell that he wrote this message specifically for me.

I see this happening a lot. Usually it’s just a generic, barely even existent little fart in my inbox. I don’t think “hi how r u” or even “hi princess hows it going?” is adequate for introducing yourself to someone you’d like to date, but maybe I’m just a snob. Sometimes, though, I get lengthy, detailed, well-composed messages that seem to be very thoughtful until I take a step back and realize that the user copy/pasted his missive to a number of accounts who fit his demographic requirements but don’t seem to have much else in common.

I’m sure this happens to everyone to some extent, but then I also get an additional dose as a bisexual woman. I get the messages from couples who want to find another woman to join them in threesomes, so they scoop up a bunch of bi women’s accounts and just shotgun these transparently non-personalized “please give us a chance” missives without even checking our profiles for any sign that we’re into threesomes. I mean, we’re bi, so, obviously we MUST be into threesomes. Duh. Which is why these poor sad couples need to spray their come-ons at as many women simultaneously as they can.

Now I’ll show you some more guys who’ve hit my Squick buttons, and very recently. I don’t mean this as a tall glass of Guys, Don’t Do That. It’s more a helping of Guys, Do This Instead. Let it never be said that feminists are humorless, sex-phobic harpies who want men to be miserable. I am handing out FREE ADVICE to improve your chances of a response, dudes! I can’t give you advice that’ll guarantee a reply, and certainly none that’s certain to make a woman want to jump on your peen. That advice doesn’t exist. I will, however, help you to get out of your own way. Especially if you’re seeking an intelligent, thoughtful woman for a long-term relationship. 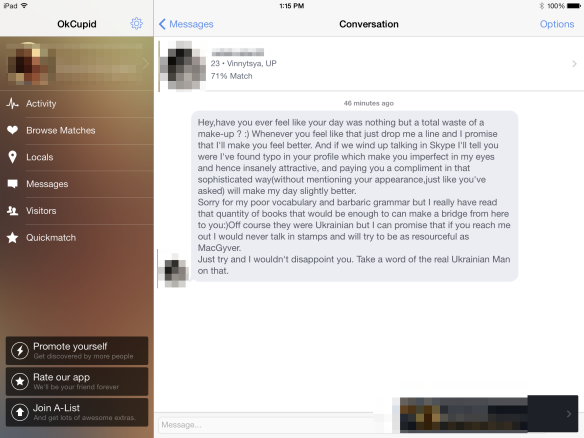 I’ll give Mr. Vinnytsya this much: he has definitely read my profile. It’s unfortunate that he’s using this knowledge to be icky.

I would be glad to learn of a typo in my profile, except a) if he really wanted to show me where I let the Grammar Nerd cape slip, he could’ve done so right there on OKC, b) I did not ask for any dude to impress me by pointing out typos in my profile (although it is the sort of thing I would do), and c) I’ve read through my profile in Apple Pages, and…nope, no typos. He’s holding out the promise of a typo to get my Skype info. Not cool, dude.

Even better, he seems to think that he needs to take a woman down a peg (just a little teensy peg, but still, this is telling) before he can find her attractive.

Here’s another hint: if you’re contacting a woman who’s made a specific suggestion in her profile for people who want to contact her, there’s no need to make a big display of following the suggestion. If you simply do the thing she’s asked for, she’ll notice.

See what I mean about being jaded, guys? 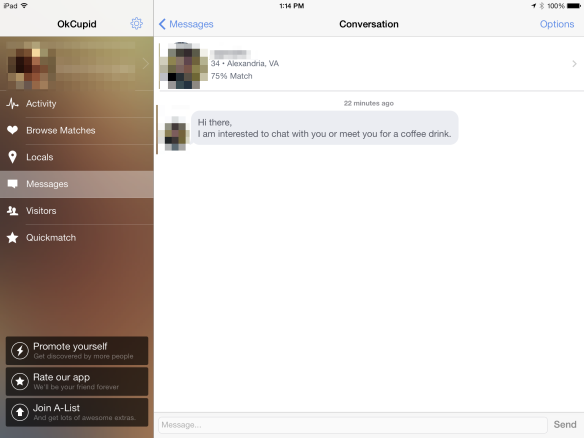 One of my techniques in online dating (which I’m sure some of you will read as overly exacting, shallow or arbitrary) is what I call a Match Percentage Threshold. See these percentage numbers associated with profiles? For those who haven’t used OKCupid, those numbers are calculated based on how two users answered the same set of questions. The threshold means that if a user’s match percentage is below a certain point, I generally don’t even look at his profile. I’m sure a lot of online daters have a lower threshold than mine, and many don’t even really decide on a number. I have no doubt that even having a Match Percentage Threshold in online dating will strike many as cutting lots of great partners out of my chances, and they may be right to an extent. I’ll tell you what, though: these sketchy, thoughtless, content-free messages are overwhelmingly from users who fall well below my threshold.

This message above is not objectionable, except for the part where I have no way of knowing if he even spent more than 5 seconds looking at my profile. I could be a goat-fucking cult leader who’ll ruin his life within the first 6 hours of meeting him in the flesh, for all he knows. 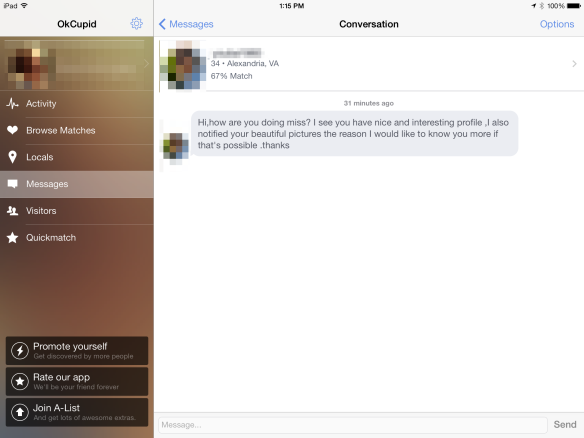 I’m pretty sure he gathered up a huge stack of OKC accounts marked as female, straight or bi, and within a certain age range, and sent this message to all of them. And he didn’t even run his typing past a friend with non-terrible English skills before he hit Send. I know there are some 30something single men in Alexandria, VA who could have shown him the difference between “notify” and “notice.” 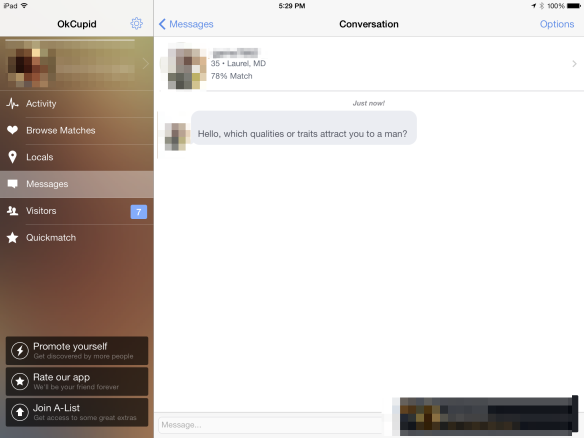 Dude thinks I’m going to give him a bulleted list of requirements for my Ideal Man, so he can explain to me how he fits some of those bullet points, and the rest are not really in my interest.

Or, he could try reading my profile, especially my answers to match questions, to suss out what I’m seeking in a partner, and then he could use that knowledge to send me a message that doesn’t hit my Squick Button. (He does fall below the threshold, though, and that’s not his fault.)

Reading comprehension. That’s something that attracts me to a man. It’s not everything, but it certainly helps to narrow the field.