Ben Carson is very, very afraid that Life As Christians Know It will go catapulting down the crapper if marriage equality advances. He had this to say to the Illinois Family Institute:

Speaking to the anti-LGBT group Illinois Family Institute (IFI) on Friday, Carson explained that the Bible compares the relationship between Jesus Christ and his followers to a marriage.

“Think about the implications of that,” he said. “When people come along and try to change the definition of marriage, they are directly attacking the relationship between God and his people.”

In his speech to IFI on Friday, Carson opined that the “secular progressive movement” was like a “new group of mathematicians who come along and say, ‘Two plus two is five.’”

“The new ones say, ‘If it’s not five for you, you’re a mathophobe,’” he added. “We just have to continue to make it clear because they want to say that anybody who doesn’t believe what they believe is a hater.”

For someone who can put so many big words together, Dr. Carson sure sounds like a dude swimming eyeball deep in Lake Nonsense.

His concern about marriage equality appears to be as follows: Christians’ love of Christ is like a marriage, so, if same-sex couples are also allowed to get married, then Christians will begin to view their relationship with God in a different manner, and that would ruin everything they hold dear.

(Note: Openly gay people are not included in Dr. Carson’s definition of Christianity.)

Not only will the destruction of Christians’ love of Christ be a consequence of the gay marriage agenda, it is the mere opening of Pandora’s Box. We’re opening with the relatively warm-and-fuzzy act of marriage equality so we can later move on to destroying EVERYTHING about the Bible.

In order to prevent Christians’ relationship with Jesus from changing—meaning, in order to prevent the destruction of the fabric of the universe—the legal definition of marriage must be the same as it is in the Bible.

So, let’s review the way the Bible says marriage is supposed to be: 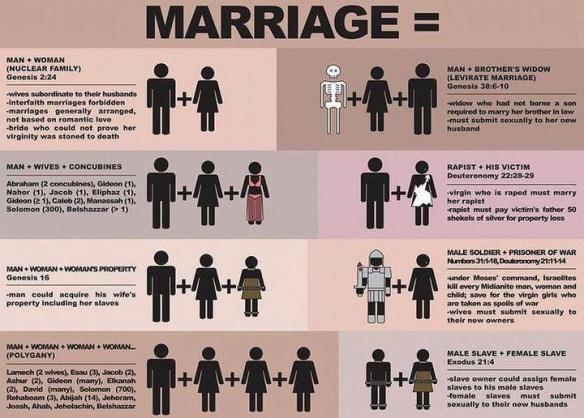 Whereas, if two consenting adults of the same gender get married, that ruins everything for True Christians.

The Bible also calculates that pi=3. Now we have these blasphemous people called “math teachers” asking us to believe that pi is 3.141592653589793238 etc. Everything was so much easier and cleaner before we began to stray from the eternal wisdom of the Good Book.